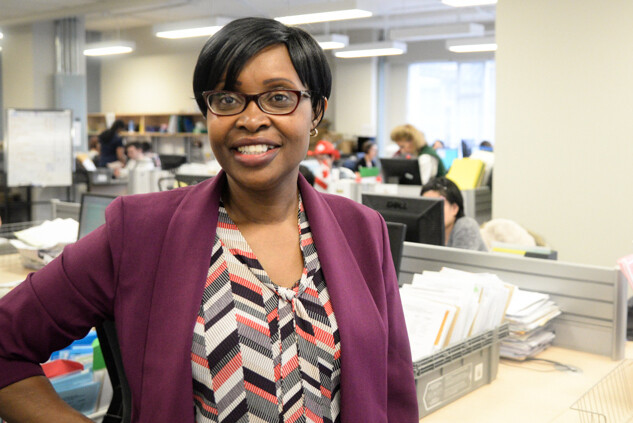 Table of Contents show
1 When did you arrive in Canada?
2 What were your first few months like?
3 How did you sort through all that advice?
4 How did you build your career in Canada?
5 That could have been an interesting experience.
6 Were you a single parent?
7 You’ve traveled quite a bit for your work and education. Can you list all the countries you have been to?
8 Can you list the number of languages you speak?
9 What made you move to Canada?
10 How long did it take?
11 How soon after your arrival did you start working at WES?
12 It’s been 15 years at WES since 2002. Can you list some of the different positions you have gone through at WES?
13 Your journey as a skilled immigrant in Canada is deeply enmeshed with WES. What are your plans for the future?
14 Maybe check out Iqaluit?
15 Thank you for sharing your story.

When did you arrive in Canada?

The culture shock, the weather, and everything was quite different for me. The first thing I had on my mind upon landing in Canada was to make sure my 12-year old daughter was settled in school.


I was fortunate in that the Kenyan community in Ontario is quite large, and somebody picked us up from the airport. We lived in their house for two months and they showed me an employment centre nearby. I also received advice from community members; each one with different experiences settling in Canada.

How did you sort through all that advice?

It depends on your mindset, your plans, and experiences of those you listen to. I was a human resource (HR) manager back in Kenya and I had worked in different public organizations. I didn’t think I was going to get a manager’s job immediately here in Canada. But I knew I had to start from somewhere. I was ready to take up whatever was available and work my way toward what I wanted to do as a career and think through whether I really wanted to pursue the same HR career in Canada.

How did you build your career in Canada?

It started with volunteering positions in different organizations around Toronto like Volunteer Toronto and Children’s Aid Society of Toronto. I also registered in the Employment Assistance Program at Skills for Change. I considered joining the Certified Human Resources Professional (CHRP) development course, but the funds I had at the time were needed to pay bills while I settled. Through my internet search, I was offered a job to work as an HR assistant in Iqaluit, Nunavut, but I didn’t accept their offer as I did not want to relocate after having just landed in Ontario.

That could have been an interesting experience.

I know. I wouldn’t mind going there now, but at the time I had to turn it down because of my daughter. Imagine uprooting her from Africa to a place with little sunlight for half the year. She would have been totally disoriented.


Were you a single parent?

Yes, I was a single parent. Back in Kenya, we had the support of the whole family; it was relatively easy to raise a child alone. I was a little unsure what kind of support I would get in Canada, but when I arrived here, I realized I would continue to have that support from the Kenyan community, which became my extended family in a sense.

You’ve traveled quite a bit for your work and education. Can you list all the countries you have been to?

I traveled to most Kenyan provinces for work. East Africa: Tanzania, Kenya, and Uganda. Malawi. Zambia. Attended conferences in Zimbabwe and South Africa. I went to India, and then to England, Scotland, and Ireland. I’ve also traveled to the American states of Oregon and Massachusetts for seminars on HR, to study HR systems in their hospitals.

Can you list the number of languages you speak?

The national languages in Kenya are English and Swahili, or Kiswahili. I speak Bukusu, Maragoli, and Iteso. I also speak French.

We did a couple of articles on WES Advisor about the benefits of speaking multiple languages. How has knowing different languages and interacting with diverse cultures helped you?


It has benefited me. Having grown up in an environment where family members would crack jokes at each other in different languages, to working in the public sector with people from different regions and cultures, these experiences have enabled me to understand and to help others. I am able to relate to people with backgrounds different from my own.

What made you move to Canada?

My adventurous spirit, I guess. I’d been to the U.S., so I thought, why not Canada? I wanted to experience what the cold was all about. Kenya gets cold too, in some places, especially in higher altitudes. My office was near the Canadian embassy in Nairobi, and I always saw this lineup of people applying for visas. One day I joked to my friend and said, “What if I tried out too? How long would that take?”

How long did it take?

How soon after your arrival did you start working at WES?

About one month, actually.

It’s been 15 years at WES since 2002. Can you list some of the different positions you have gone through at WES?

When I started, I was a customer service administrative assistant. Almost like an intern placement, through a program at Skills for Change that was about helping newcomers gain Canadian experience. After three months or so I got a permanent position as a WES employee.

WES needed somebody who spoke French and English to cover for a maternity leave, so I did that for about two years while still deciding on my career choices and attending programs for internationally trained professionals. I was then offered the position of junior evaluator, and then credential evaluator, followed by area specialist. I was appointed to a group manager position in 2014. In 2015, WES went through a restructuring program and I was among those selected to manage a team in the Canada office for testing the pilot project.

Your journey as a skilled immigrant in Canada is deeply enmeshed with WES. What are your plans for the future?

I want to continue on the path of working in the area of international education. I’d also like to pursue a Ph.D. at some point, which I was unable to do before due to family obligations and commitments. I don’t ever want to become set in my comfort zone. My daughter is now grown up, and she has taken up my former career in HR. Canada is a big place. I have barely explored it. I would like to do more of that now.


Thank you for sharing your story.

How to immigrate to study in Canada without IELTS