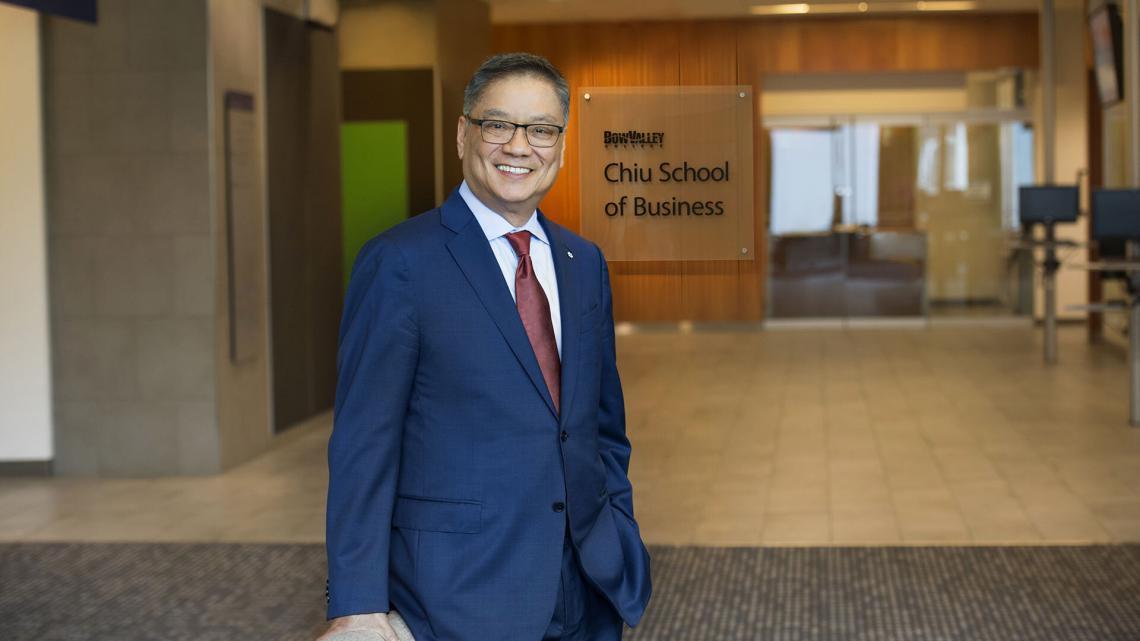 Wayne Chiu was raised in Hong Kong and grew up with five brothers and sisters in a neighbourhood that was poor in terms of living conditions, but rich in friendships. After spending many years working for other people, Wayne’s father made the decision to create his own opportunities by starting a small business. The importance of personal relationships, along with the desire to control his own destiny, set the foundation that helped Wayne become the successful businessman, social entrepreneur and philanthropist he is today.

Wayne Chiu is a successful businessman and philanthropist who has left an indelible impact on the City of Calgary, Alberta, Canada. He has a passion for social entrepreneurship, believing that business and society can work together toward common goals. He launched Trico Homes, one of Calgary’s largest home builders. Wayne is an advocate for affordable housing, and has made significant contributions to many non-profit organizations, the Chiniki First Nation and the city’s post-secondary community.

Wayne Chiu came to Canada as an international student, attending the University of Manitoba. After a brief spell back in Hong Kong, he returned with his wife, Eleanor, in 1982 and settled in Calgary. It took him several months to find work as an engineer—and the job lasted only 2 years, as a recession was taking a toll on the oil and gas sector.

Using savings, Wayne Chiu and and wife Eleanor bought an ice cream shop in a downtown Calgary office building. But after about a year and a half, Wayne sold the shop and found a job as a sales engineer. Meanwhile, Eleanor returned to university to upgrade her credentials and eventually earned her chartered accountant designation.

By 1987, Wayne’s entrepreneurial spirit had resurfaced, and he launched a renovation company. He established Trico Homes in 1992, when he was presented with an opportunity to work on several multi-family housing projects in Calgary.

With access to minimal capital, the company built just 10 houses in its first year. But it built 15 the next, and grew steadily from there. To date, Trico has built more than 10,000 homes. In keeping with Wayne’s belief in making safe and healthy housing accessible for all, affordable rent is a key focus.

In 2008, after several profitable years, the Chius established the Trico Charitable Foundation.

“I always said to myself that if I have the opportunity to make money, I want to give back to the community where I made it,” says Wayne, who became a Member of the Order of Canada in 2015.

The Foundation helped create the PEAK Home Ownership Program—which provides first-time home-buyers with their down payment—and has launched or collaborated on innovative programs like Futurpreneur, Enterprising Non-Profits, the Social EnterPrize and the Social Enterprise World Forum.

“The Chius are leaving a legacy to Calgary,” says Chris Hopfner, chair of the Trico Group Board. “By providing seed money to help people experiment with sustainability and social enterprise, they are adding to the vibrancy of our city.”

The 2013 southern Alberta floods led Trico into a relationship with the Chiniki First Nation. Trico worked with the Nation to restore 160 flooded homes. It then used the proceeds of the project to support the community. Collaboration continues through the Chiniki Trico Limited Partnership, working on two major initiatives. The first is helping evolve the Chiniki Cultural Centre into an event centre to build community connections and an educational experience for guests. The second is a renewable energy project which will create employment, skills development and revenue for the Chiniki Nation by generating and selling solar power into the Alberta grid.

Wayne Chiu has been incredibly generous with his time and through financial contributions to various causes. Education remains near to his heart. His significant donation helped Mount Royal University establish the Roderick H. Mah Centre for Continuous Learning. Other donations supported SAIT’s Trades and Technology Complex, University of Calgary’s Chiu Family/AstraZeneca Chair in Cardiovascular Health Promotion and Disease Prevention and helped establish the Chiu School of Business at Bow Valley College. He and Trico have long been supporters of the Kids Cancer Care Foundation. He has also served in various capacities with United Way Calgary, the Canadian Youth Business Foundation, Calgary Stampede Foundation Board, Alberta Champions, Bow Valley College, the TELUS Community Board and many other organizations.

Wayne has been recognized for his business and community accomplishments through various honours, including being named a Member of the Order of Canada and receiving the Queen Elizabeth II Diamond Jubilee and Alberta Centennial medals. He has received an Immigrant of Distinction Award, the Ernst & Young Entrepreneur of the Year Award, the CASE Community College Benefactor Award and the City of Calgary’s Community Achievement Award. TRICO has regularly been recognized as one of “Canada’s Best Workplaces” and among “Canada’s 50 Best Managed Companies.”

Of all Wayne Chiu’s accomplishments, their three children—Patrick, Leah and Elliot — top the list. Wayne values the time with his family, including the opportunity to travel and hike. Wayne Chiu has made an invaluable mark on virtually every corner of the Calgary community.

Based on stories from Doing well by doing good and Wayne Chui, CM, ICD.D