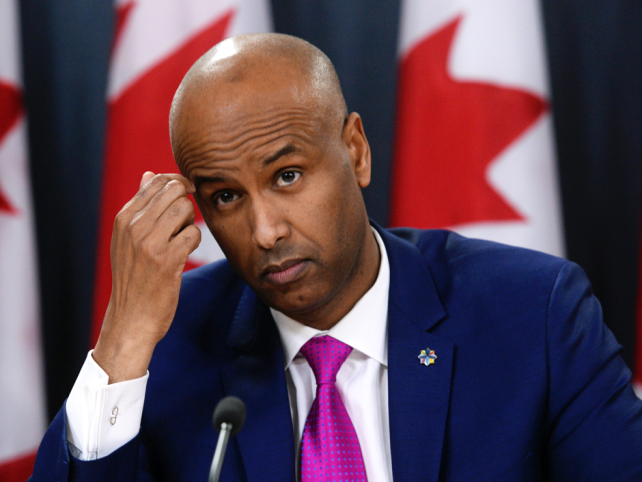 The Honourable Minister Ahmed Hussen was Canada’s Immigration Minister between January 2017 until November 2019. He is currently Canada’s Minister of Families, Children and Social Development. Minister Hussen immigrated from Somalia (via Kenya) to Canada in 1993 and settled in Toronto.

Minister Ahmed Hussen was born and raised in Mogadishu, Somalia. He has five older siblings and his father was a long-distance trucker. Hussen learned to speak English there from a cousin. He and his family left Mogadishu after the Somali Civil War reached their neighbourhood. They lived for a period of time in Kenya, in a camp in Mombasa and several apartments in Nairobi. Minister Ahmed Hussen is married to Ebyan Farah, a fellow Somali-Canadian refugee. Together, they have three sons.

Two years after leaving Mogadishu for Kenya, Hussen’s parents bought him an airplane ticket to Toronto, where two of his brothers had already moved. He initially resided with a cousin in Hamilton, and moved to Toronto in 1994, where he settled in Regent Park in 1996.

Not many people know that Hussen is quite the athlete. He completed secondary school in Hamilton but due to a Canadian government policy that delayed granting permanent residency status to emigrants from Somalia, he had to decline three athletic running scholarships to universities in the United States.  The Honourable Minister Ahmed Hussen eventually attended York University to earn a BA in History in 2002. He would later earn a law degree from the University of Ottawa. After passing the bar exam in September 2012, he went into law practice specializing in immigration and criminal law.

Minister Ahmed Hussen began his career in public service after high school, working with the Hamilton-Wentworth social services department. He served as a director on the board of the Global Enrichment Foundation, an organization that has enabled women in East Africa to access education in colleges and universities in the region, and on the board of Journalists for Human Rights, an organization that empowers journalists in developing countries to cover human rights and governance issues objectively and effectively.

Minister Ahmed Hussen previously worked as a Special Assistant for intergovernmental affairs to former Ontario Premier Dalton McGuinty, and sat on the Cross-Cultural Roundtable on Security.

Minister Ahmed Hussen also co-founded the Regent Park Community Council in 2002. As its president, he played a key role in securing the $500-million revitalization project for Regent Park while advocating for its 15,000 residents to ensure that their interests were protected. He was awarded the Queen’s Gold Medal for his leadership efforts in the Regent Park community.

While serving as National President for the Canadian Somali Congress, Minister Ahmed Hussen worked with national and regional authorities to advocate on important issues to Canadians of Somali heritage, strengthening civic engagement and integration. His results-driven reputation led to an invitation from the Toronto City Summit Alliance to join a task force for modernizing income security for adults.

As a result of his advocacy work, the Toronto Star recognized Minister Hussen in 2004 as one of 10 individuals in Toronto to have made substantial contributions to the community.

It is not surprising that the Honourable Minister Ahmed Hussen is a Canadian migrant success story and an inspiration to all who desire to settle in our great country Canada!!!

BC issued 428 invitations in latest BC PNP draw