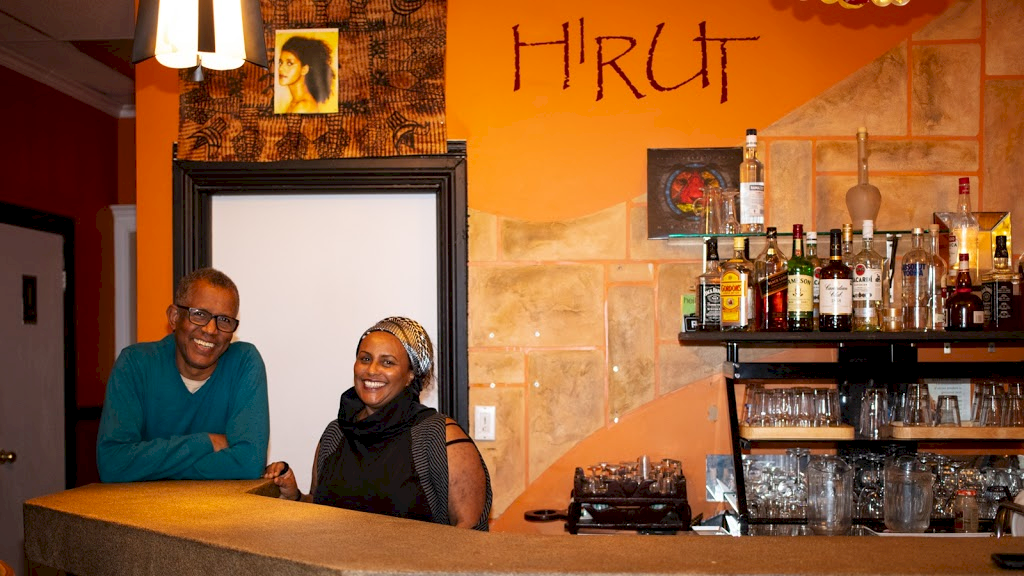 “We applied through the UN Refugee Agency (UNHCR). It gave us three options where to settle: Australia, the United States, or Canada. We chose Canada. We were taught Canada was peaceful,” says Hirut, co-owner of Hirut Café with his wife, Tibebe Woldemichael.

Tibebe and Hirut immigrated to Canada from Ethiopia via Greece as refugees in the late 1980s. Within three days of being in Toronto, Tibebe found a job at the Bank of Nova Scotia. Hirut took ESL lessons and did an apprenticeship as a hairdresser but didn’t pursue the trade. A friend suggested to Hirut that they partner and take over the contract of an Ethiopian restaurant on the Danforth. They eventually bought the business and ran it for seven years. This success motivated Hirut and Tibebe to buy their own commercial property and open Hirut Cafe.

See also: How to immigrate from Ethiopia to Canada

They designed their restaurant to include a stage where they envisioned hosting music and poetry nights. Standup comedy was not on the radar.

Come listen to established and emerging musicians create beautiful vibes on the Hirut stage. We feature monthly jazz residencies with some of Canada’s most notable musical acts such as Don Naduriak, Daniel  Barnes, the Eucalyptus Collective  and many more. As a hub for Ethio-Jazz, Girma Woldmichael and many other jazz greats drop in for jam sessions. We also host musical collectives such as the Fingerstyle Guitar Association and community singalong groups.

Enter Canadian comedian and actor Kevin MacDonald from suburban Mississauga. Along with Canadian Comedy Award winner Winston Spear, comedian and writer Scott McCrickard, and myself, we paid a visit to the restaurant and dug the vibe. Doing standup comedy in an Ethiopian restaurant, however, was a new one for everyone.

Enjoy some of the best comedy and short videos in Toronto at our monthly comedy night and special comedy events. The Hirut stage is a welcoming and inclusive space for creative expression and our audiences appreciate comedy as a art form.

After a modest beginning, word of the comedy night in east end Toronto spread. Many in the Danforth East neighbourhood soon discovered the show. Regulars Lisa Mazzara and Joe Siino credit the show for bringing them closer together. “We came to Hirut on our fourth date. By then I knew Joe had a great sense of humour and he would appreciate the comedy. He fell in love with it instantly, just as I did.” says Lisa.

Over the years, the aptly named ‘Hirut Hoot’ comedy show reached new creative heights. Comedians who perform at the restaurant comment on the warmth and good feelings they get. “Ethiopian culture embraces the arts,” says George Westerholm, a comedian, musician, and TV writer for such shows as This Hour Has 22 Minutes and the Rick Mercer Report. “Tibebe and Hirut have cultivated a great space for comedians and musicians.”

The neighbourhood has also taken notice of the spirit at Hirut Café. Many community groups meet there, including the Danforth East Community Association, and the Enku Scholarship Fund, a registered Canadian charity that helps underprivileged girls in Ethiopia pursue university education which recently organized a fundraising event featuring Ethiopian-Canadian comedian Dave Getachew.

LITERARY & COMMUNITY at Hirut Café
Hirut is an ideal space for literary readings, book launches and community meetings. Our Bright Lit, Big City literary night is a series on the second Thursday of every other month featuring established and emerging writers, poets, screen and stage writers reading from their work. Community groups are welcome to gather in our space and we are proud to support the work of the Danforth East Community Association (DECA).

Gelila Ephrem, founder of the Enku Scholarship Fund, was touched when the comedian donated his fee back to the cause. “Dave gave a great comedy performance. It was refreshing to see his comedic take on life as a young first generation Ethiopian-Canadian. And Tibebe and Hirut have helped us so much. They’ve hosted three of our annual fundraisers, as well as every meeting with the Board of Directors.”

Recently retired after 29 years successful years at Scotiabank, Tibebe now focuses on musical acts, especially ethio-jazz. Many high-profile jazz acts regularly play at Hirut Café, including Daniel Barnes and Girma Woldemichael, Don Naduriak, and others. Tibebe and Hirut perform on occasion too, he on guitar and Hirut on vocals.

They both count their blessings. “This is our dream come true. The biggest happiness for me is the friends we’ve made. All of my friends and clients at the bank, all the great comics, the great musicians – Canada gave us so many things,” says Tibebe.

In these times of building walls and excluding people, they see the value in the stage they provide.

“The world is becoming polarized. We wanted to make a space where we can bring everyone together through art, through music, to teach tolerance through art, even teach people through comedy. We need to laugh at ourselves,” says Tibebe, with a big smile.

This story based on Entrepreneur couple Tibebe Woldemichael and Hirut Dagnachew welcome comedy and music as a way to teach tolerance.