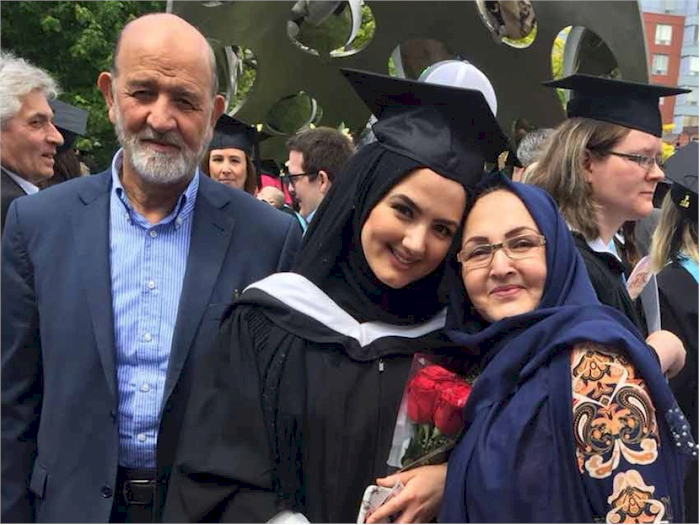 Afghan Canadian Sadaf Parweez recently made headlines in Durham region after graduating from Ontario Tech University. An Afghan refugee, Sadaf is a migrant succeess story having overcome the obstacles many newcomers to Canada face when trying to pursue their education. The 28-year-old Durham resident is the first in her family to graduate from university.

Sadaf Parweez was born in Afghanistan, the fifth of six children. The family fled Afghanistan in 1995 and for nearly seven years, Sadaf and her family lived as refugees in Pakistan.

“My father always had a dream for his children to go to school, to have a university degree, to have a good future,” Sadaf Parweez says. “He said in Canada, you can have this. You can be safe.”

English is not Sadaf’s first language, or her second. It’s actually her fourth after Farsi, Pashto and Urdu. But that didn’t stop her from finishing high school, and completing a social work program at Seneca College in 2014.

Her next goal was university — she set her sights on studying political science at UOIT, with a goal of learning more about the political landscape in Canada.

University was daunting at first — Sadaf worried that her English skills weren’t good enough and was intimidated by the huge lecture halls with hundreds of students.

“It was an eye-opening program for me…now politics was something I could have a conversation about with people, with my boss at work, with the bus driver.”

Her next goal is to build a career helping people — Sadaf says she is especially interested in youth mental health, and the issues facing Indigenous youth.

“For all the Afghans all around the world — many have suffered a lot — and when they see the kids doing something better with their life, it makes them very happy,” Safad says.

Sadaf Parweez was interviewed by the media about her educational journey after coming to Canada as a refugee, including the following interview by “Muslim Link”.

You have been interviewed by UOIT and Durham News about your graduation. What has it been like to receive this media and community attention?

I feel grateful and proud for being part of this community and choosing UOIT for my secondary education. And its good to have media focusing on individuals who have successful stories to share and inspire other youths who are new to country and shares the same experience as myself.

As a new Afghan immigrant, when I glance back to 2002, I see a young teenager stepping into a land of opportunities who not only went through many culture shocks but also had to face challenges of cultural barriers and language barriers. I believe there should be more programs and workshops taking place within schools and communities to teach these youth and families more about the Canadian system, programs, policies and culture. There should be proper ESL classes within elementary and high schools for newcomer students who have difficulty learning a new language. I would also suggest focusing on their mental health as well, since many refugee students are migrating from countries that have been suffering from war for many years.

Why do you think it was good that you went to college before going to university? Do you think going to college should be more encouraged among newcomer families?

I always wanted to go University but due to my difficulties learning English and other classes I was placed in Applied level not Academic level therefore after graduating high school I was only able to apply for College programs. However that did not stop me from achieving my goal and chasing my dreams. I believe every student should have a choice and it’s never too late to continue their studies and fulfil their dreams as long they have a set of goals in life for their dreams to come true. So, if college would be there only option or first option, there’s nothing wrong with that because at the end of the day you’re still learning and gaining more knowledge and experience in life.

Why do you think it was good that you took time to work before heading to College? Would you recommend this to other newcomer students?

I took a one-year break after high school before entering College because I wanted to decide what I really wanted to study and focus on. I wasn’t sure of what career I would be interested in therefore I decided to enter the job market first and know what’s best for me before I waste my time and money taking the wrong program in College. Yes, I would recommend this to other newcomer students as long as they’re not wasting their time and energy on something that will not be beneficial to their career in the future since we all know that TIME is a very precious gift in our life that if you lose it once you will never find it again or be able to buy it from anyone or anywhere.

Despite graduating from College with a high GPA, I still was afraid of not being able to be successful in university due to moving from Applied level to Academic level. I did face challenges with writing long essays and major papers in my first year since that was new to me however with all the help I could get from my professors and UOIT services I was able to overcome these challenges and successfully finished my Bachelor Degree in Political Science Studies.

Tell us about your work with the Muslim Welfare Home. Why do you feel that your lived experience helps you do your job well?

Muslim Welfare Home is a homeless shelter accepting women with children coming from different cultures and faiths. It is run by the Muslim Welfare Centre of Toronto. I chose this job and place because I enjoy helping those who need help, and that’s what I have always been aiming to do, by reaching out to communities who need help and improvements. I know what it feels like losing your home and living in a country that suffered from war for decades and not having one single happy memory of your childhood, therefore my experience helps me understand the clients’ situations when they enter the shelter.

Based off of your university degree, do you feel you better understand how Canadian politics impacts the work you do with the Muslim Welfare Home? If yes, could you explain.

Based on my knowledge of studying Canadian politics and learning about it, yes, politics plays a major role in our lives, since the laws and policies being formed by the government and politicians impact our daily lives. Therefore during an election, the citizens need to be aware of who they’re voting for. It’s very important to know about these parties’ policies since not only do they impact our lives, but they also impact our communities and our living environment.

Is there anything else you would like to add?

As an Afghan Canadian immigrant, now that Canada has become my second home, my message to all other newcomer youth and families would be to cherish this land as your own homeland and treat it in the way you want to be treated on this land. If you want to be treated with love, dignity, respect, and fairness, then be fair to this land and its people, be respectful to its resources and show love and respect to your community which you’re living in since not everyone shares the same cultural values and religious beliefs as you do.