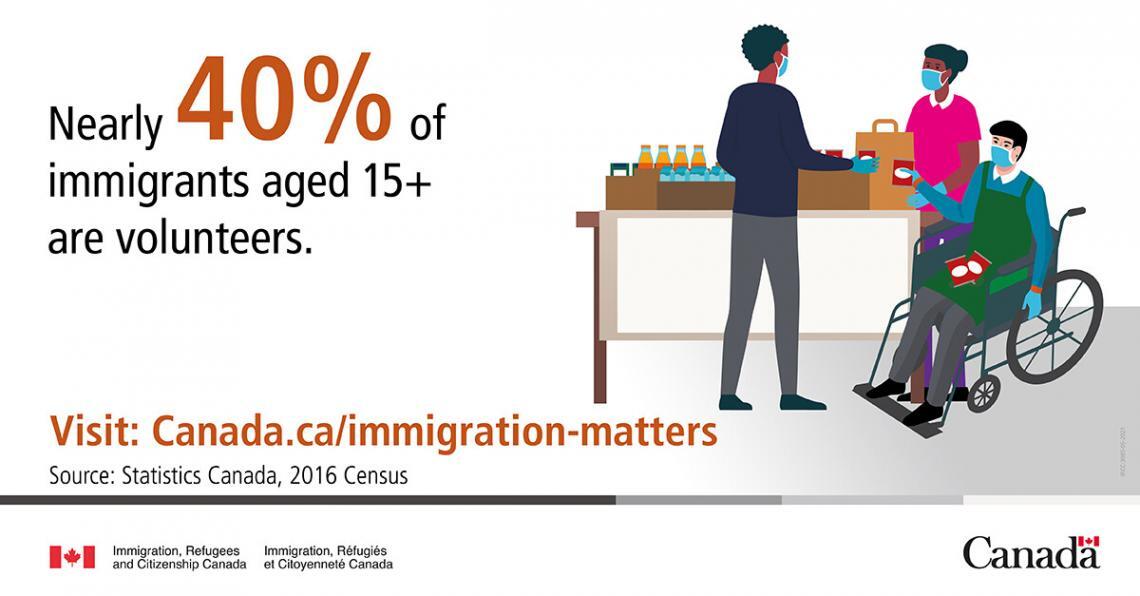 Thirteen million Canadian volunteers give their time and a portion of their income to support worthy causes in the charitable sector. Canadian immigrants volunteer efforts are a major contributor.

Canadian immigrants are an important source of workers to ensure the charitable sector continues to thrive across the country.

Michael Lee-Chin is the Jamaican-Canadian billionaire Founder, President and Chairman of Portland Holdings, a privately held investment company that manages public and private equity and has an ownership interest in a collection of diversified businesses operating globally. The Michael Lee-Chin Crystal at Toronto’s Royal Ontario Museum is named in recognition of his $30 million gift. His donations to Canadian universities, such as McMaster University and the University of Toronto, and hospitals, such as the Toronto General & Western Hospital Foundation and the Joseph Brant Hospital Foundation, have made a lasting impact. Among his many personal accomplishments, he was awarded the Order of Jamaica and the Order of Ontario and is the recipient of numerous honorary doctorates.

Aditya Jha is a successful Canadian entrepreneur from India, making philanthropy a large part of his life. He founded the POA Educational Foundation, which funds multiple projects focused on education, entrepreneurship and good governance. For instance, he has funded post-secondary scholarships and promoted education and entrepreneurship in First Nations (Project Beyshick). He is a Member of the Order of Canada.

Born in Romania, Andrew Harper lived in Israel, Cuba and the United States before coming to Canada with his wife in 1954. Together, they built a successful fine foods business in Montréal, and then retired there. Upon the death of his wife, he created the Andrew and Carole Harper Tolerance Fund in her memory, and made many donations to benefit organizations in the city, including the MADA Community Centre, the Chez Doris women’s shelter and the Alzheimer Society of Montréal.

Born in Iran, Djavad Mowafaghian is the founder of the Djavad Mowafaghian Foundation, which funds projects to improve the lives of children globally in relation to health, wellness and education. In 2011, his foundation donated $15 million towards building a new centre for brain health research at the University of British Columbia. As a result of his philanthropic work, he received the Queen Elizabeth II Diamond Jubilee Medal and the Dalai Lama Humanitarian Award, among other distinctions. He’s a Member of the Order of Canada and a recipient of the Order of British Columbia.

Lebanese-Canadian Mohamad Fakih is the President and CEO of the award-winning Paramount Fine Foods restaurant chain, employing more than 2,000 people in Canada and abroad. He also founded the Fakih Foundation to alleviate poverty and advance education for vulnerable communities. Among the many beneficiaries of his philanthropy are the Canadian Cancer Society, Sick Kids Hospital and the Toronto Make a Wish Foundation. Waterstone Human Capital named him the Most Admired CEO in Canada in 2019.