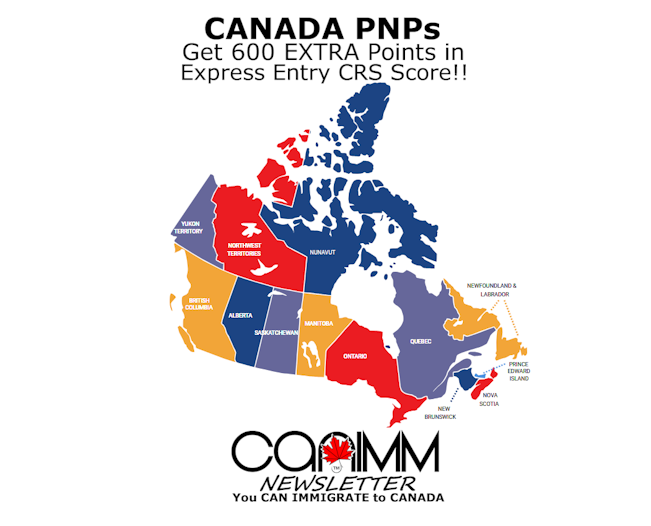 Importantly, Canadian provinces do not have the ability to give out permanent residency status.  However, as a result of a nomination you get a whopping 600-point boost to your CRS score. See Tips to boost your CRS Score.

Applying for a provincial nomination is not the same as applying for Canadian permanent residence.

For example, Nadih has a bachelor’s degree. She’s been working in agriculture sciences for five years. Nadih has never worked or studied in Canada. She has the necessary Canada English or French language proficiency.

Nadih’s federal Express Entry pool CRS score is 310. However, she recently obtained a provincial nomination through a PNP. As a result IRCC awards her additional 600 points.

Consequently, Nadih’s total CRS score jumps to 910 points! This is well above the minimum CRS score that Nadih needs to get an invitation in a federal Express Entry draw.

its BCPNP. Skilled workers and international graduates received 177 invitations. Their minimum scores ranged from 78 to 132 points. Another 27 invitations went to candidates who are Early Childhood Educators and Assistants with minimum score of 60 points.

The remaining 20 LAAs went to Skilled Workers Overseas candidates through a Strategic Recruitment Initiative, with a minimum score of 703.

For how to apply for MPNP nomination, go to Manitoba Provincial Nominee Program (MPNP).

September 7 BCPNP Draw. British Columbia invited more than 369 candidates to apply for PR nomination under the BCPNP. BC typically holds a provincial nomination draw each week. The draw targeted candidates in technology sector.

Candidates were required to have submitted Express Entry profiles into the federal Express Entry pool within the 12 months preceding the draw date to qualify.

September 1 SINP Draw. Saskatchewan invited a total of 941 candidates from Express Entry and Occupations-In-Demand categories of its Saskatchewan Immigrant Nominee Program (SINP). The minimum Expression of Interest score in both categories was 61. All successful candidates had Educational Credential Assessments (ECA).

August 30 BCPNP Draw. British Columbia invited more than 254 candidates to apply for PR nomination under the BCPNP. BC typically holds a provincial nomination draw each week. The draw targeted candidates in technology who received 207 nominations. The minimum BCPNP score ranged between ranged between 95 for Skilled Workers with Express Entry to 60 for Entry Level and Semi-Skilled candidates.

The province of Saskatchewan held two recent draws under its PNP. First, on August 18, 668 candidates received invitation with minimum SINP score of 67. Then on August 25 SINP invited another 629 with minimum scores of 65.

August 23 BCPNP Draw. British Columbia invited more than 210 candidates to apply for PR nomination under the BCPNP. BC typically holds a provincial nomination draw each week. The latest draw targeted candidates in technology, teaching and health occupations. The minimum BCPNP score ranged between 106 for Skilled Workers with Express Entry to 75 for Entry Level and Semi-Skilled candidates.

The Prince Edward Island Provincial Nominee Program (PEI PNP) invited a total of 121 immigration candidates on August 18. PEI holds about one draw per month and releases its schedule for the year in advance.

Canada’s largest province, Ontario, held its under the Ontario Immigration Nominee Program (OINP) under the Entrepreneur Stream on August 16. The province issued invitations to apply to 30 candidates with scores that ranged between 138 and 160. This is the first draw in the Entrepreneur stream since 2021.

Successful candidates must attend a mandatory interview and sign a performance agreement.

If they are successful, they will get a temporary work permit to move to Canada. And then 20 months upon arrival they must implement a business plan and submit a final review for PR eligibility.

To be eligible for OINP Entrepreneur Stream, candidates must meet specific criteria such as:

BC PNP invited more than 223 candidates in the BC PNP draw that occurred on August 16. British Columbia typically holds a provincial nomination draw each week on Wednesdays.

This week the province invited 177 candidates in regional draws from targeted categories, including tech occupations. The goal is to fill BC’s labour force gaps in specific areas where there is a shortage of skilled workers.

The minimum BC PNP immigration score ranged between 132 for Skilled Workers with Express Entry to 78 for Entry Level and Semi-Skilled.

Manitoba held a PNP draw on August 11 and issued 345 invitations through the Manitoba Provincial Nomination Program.

Out of the successful candidates, 86 had profiles in the Express Entry system.

On August 11, Canada’s province of Saskatchewan invited a total of 745 candidates from Express Entry and Occupations-In-Demand categories through the Saskatchewan Immigrant Nominee Program (SINP).

The province invited 433 candidates from the Express Entry category and 312 from the Occupations-In-Demand category. The minimum SINP immigration score in both categories was 68.

Pathways to immigrate to Canada from the USA after COVID-19