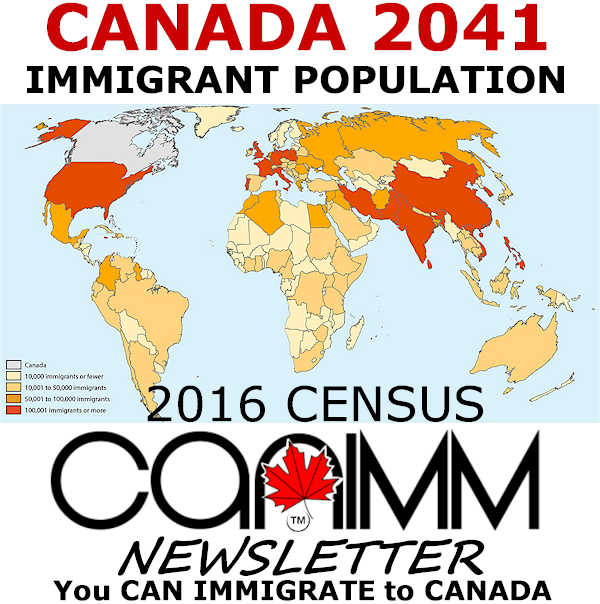 Canada immigrant population 2041. Immigrants and their children will dominate Canada population by 2041. This according to Statistics Canada projection for Canada’s demographic makeup in the year 2041 released September 8, 2022.

StatsCan projects a record-high proportion of immigrants in the Canadian population by 2041.

Statistics Canada reported that Canada population growth in 2020 was vastly reduced because of the COVID-19 pandemic impact on immigration. The year 2020 saw the lowest annual growth since 1945 and 1916, both periods in which Canada was at war. See Canada’s population estimates, fourth quarter 2020.

Accordingly, Statistics Canada projects that the immigrant population in Canada could skyrocket by anywhere from 7.2% and 12.1% between 2016 and 2041. That would be the highest historical level in the Canada’s 155-year history.

See Canada in 2041: A Larger, More Diverse Population With Greater Differences Between Regions.

Immigrants and their children will dominate Canada population by 2041

StatsCan numbers suggest that by 2041, immigrants and their Canadian-born children could account for 52.4% of the country’s total population. This would be an increase of 12.4% from 2016 when the group made up 40% of the total population.

StatsCan projects that between 9.9 and 13.9 million African or Asian-born people will be a part of Canada’s total population in 2041. That means as of 2041, 1 in 4 Canadians will be born in either Asia or Africa. They will effectively account for 23.1% to 26.9% of people in Canada!

Considering these trends and the fact that population growth in the coming decades will depend primarily on international immigration, the Canadian population in 2041 is projected to include 9.9 million to 13.9 million people born in Asia or Africa, depending on the projection scenario.

Immigrant population to concentrate in Toronto, Montreal and Vancouver

Canada’s new immigrant population will continue to concentrate in a Census Metropolitan Area (CMA) and three cities in particular: Toronto, Montreal and Vancouver.

StatsCan says that key reasons for this continuation include pressures on the housing market and the development of urban infrastructure.