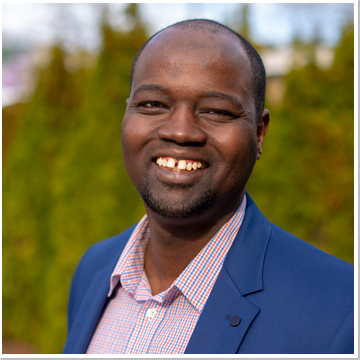 Born in Saudi Arabia to francophone parents from Chad, Hissein Idriss grew up in Malaysia and moved to Canada in 2016. In his mid-thirties, this trilingual IT specialist – he speaks English, French and Arabic – now makes his home in Victoria, B.C., where he has been busy making a difference for organizations that make a difference.

While he works for a transit company, Hissein Idriss had only been in Canada for about a year before he started a side project that soon became a passion. Inspired by the Canadian spirit of volunteering, he launched the Technology for Change Foundation to help charities make better use of technology.

Idriss notes that with so many non-profits competing for donor dollars, an outdated website or lack of technical know-how can really hamper an organization’s ability to attract funding and get its message out.

Idriss, who has a master’s degree in IT, was living in Malaysia when he first thought of using his knowledge to help charities with technology. But as he wasn’t a citizen, it was difficult for him to set up a non-profit organization there. He kept the idea on the backburner until his move to Canada.

An asset to his community

“We connected with Hissein when we needed to refresh our website and social media. With input from our staff, he was able to upgrade our website quickly and efficiently. Hissein has a great desire to give back to his community using his technology skills”.
– Carol Turnbull, Cook Street Village Activity Centre

Shortly after he settled in Victoria, he was struck by how generous Canadians are with their time and resources. “When I found out how many charities there are in Victoria alone, not to mention Canada, I was really impressed”, he says.

Hissein Idriss rolled up his sleeves, and had the Technology for Change Foundation up and running by November 2017. It works by connecting non-profit organizations with tech experts willing to donate their services, eliminating a huge expense for organizations that are chronically short on funds. Volunteers help with tasks like Web and social media development.

The foundation has already helped more than 20 charities around Victoria. Its achievements include building an app for the Victoria Society for Children with Autism, supporting Web and social media development for the Cook Street Village Activity Centre, and contributing to creative fundraising solutions for the Home of Good Hope.

Marko Curuvija, founder of The Existence Project in Victoria, says his organization, which connects marginalized people to their communities through the power of story, has been collaborating with Idriss since June 2017. The Existence Project has received tech support, upgrades, information, feedback and even computers and mobile phones to help it succeed.

“The Technology for Change Foundation enables grassroots, non-profit organizations like ours to deepen their impact”, says Curuvija. “They are doing amazing work in the community and I look forward to working with them again in the future”.

Idriss hopes that eventually his foundation will grow to the point where he can support himself by running it full time.

“My vision is to expand our services to charities, not only on Vancouver Island and around British Columbia, but across Canada”.

Story from Catching the giving spirit.