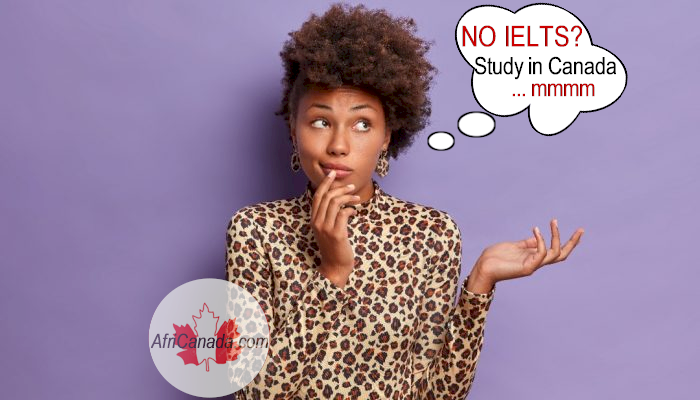 International students often ask if there are ways to immigrate to Canada with study permit without IELTS (International English Language Testing System). While this may seem like looking for “a way around the system”, it is a perfectly legitimate question with some surprising plausible answers.

There is no immigration requirement that you must sit and write an English language test in order to apply for a study permit under the general study permit application programs.

However, there are some special fast-track Canadian study permit programs targeted at specific countries that may require completion of IELTS test before you can apply for fast-track processing. Examples are the Canada Nigeria Student Express Program and the Canada Student Direct Stream programs for Pakistan, Senegal, Morocco, China, India, Philippines and Vietnam. Even then, international students from these countries can still apply under the regular study permit process which does not require IELTS.

Language skills are very important for settling and integrating into Canadian life. To establish yourself in Canadian society you need to be able to communicate with the locals in one of Canada’s official languages – English or French. For this reason, the Canadian government requires foreign nationals, regardless of their country of birth, to take either an English language test (IELTS or CELPIP) or a French-language test (TEF or TCF) to migrate to Canada.

The International English Language Testing System (IELTS) raises a lot of concerns for international students from English-speaking countries who think it is unfair and redundant to be subjected to basic English language proficiency tests. Many of them also think that the IELTS is too expensive and an unnecessary expenditure on top of the already staggering cost of immigrating.

These are valid concerns especially when one appreciates the fundamental domestic economic circumstances that make these international students choose Canada in the first place.

The good news is that you don’t necessarily need to be fluent in either English or French language to successfully apply for immigration to Canada. The level of language proficiency depends on the immigration program through which you choose to apply for permanent residency in Canada.

International students can study in Canada without IELTS

An international student will obtain a temporary visa (study permit) into Canada only if officially admitted by one of Canada’s designated colleges and universities. At this point when the student is not seeking permanent residence or any other special immigration program, it is the universities that usually require English proficiency tests, not the IRCC visa center.

To study in Canada without IELTS, you have to look for universities that don’t require it. Canadian universities have found that students who have completed their degrees from a recognized educational institution in the English language often show good proficiency in Reading & Writing. They only have to submit specific documents to get admission to the university of Canada.

You can immigrate to Canada to study without IELTS in the following institutions:

Some Canadian universities and colleges will permit conditional admission e.g. you might have to do extra language courses while studying. Simply google “study in Canada without IELTS” for more information.

Get the English Proficiency Certificate from your school

Instead of taking the IELTS, many Canadian universities and colleges require that you simply provide an English proficiency certificate. This is easy to obtain. If you studied in a school where you were taught in English, simply request your certificate and use it as proof of English proficiency. With this, you don’t have to go through the rigors and expenses of taking the IELTS.

You can study in Canada without IELTS if you take an online English language course instead of IELTS. It is easier and far less expensive than the IELTS, plus it doesn’t have a standard required for a pass. All you need is the online test certificate as proof of English language proficiency. See 20 Best Sites for Taking Free English Courses Online.

Not many people know that you can apply for a Canadian work permit without IELTS.

In some cases, applicants for study permits in certain special programs may be required to write an English test. However, generally individuals who want to immigrate to Canada for work are not required to write the IELTS test.

To get a Canadian work permit, you need to secure a job offer from your Canadian employer. If your employer does not ask for your IELTS score, then you do not need IELTS to get your temporary resident visa to work.

All you need to travel to Canada for work is your work permit – only if you later apply for permanent residence or some other immigration status that require IELTS. By then you probably have enough proficiency (and financial resources!) to successfully breeze through the tests. Fortunately, many Canadian employers do not ask for IELTS score.

General – What Language Test Can You Take to Immigrate to Canada?

As you may know by now, for general immigration purposes you can take the IELTS and the CELPIP tests to demonstrate your English-language proficiency. If you’re a Francophone, then you can take either the TEF or TCF tests. Better yet, if you’re bilingual then you can take both an English and French test to achieve the highest CRS score of 50 points for language ability on your Canada Immigration Express Entry profile!

Learn more about the approved tests for general Canada immigration below.

What is the Canadian Language Benchmark (CLB)?

Your language test results will be used to determine your language level according to the Canadian Language Benchmark (CLB) or the French equivalent, Niveaux de compétence Linguistique canadiens (NCLC). The IRCC refers to CLB and NCLC levels for language requirements on your permanent residency application.

Note: You need to take your language test first before you can work out your CLB levels. Below are the CLB equivalencies for test scores received on the IELTS General Training:

If you can speak French you will now be able to immigrate to Canada even easier due to your language skills. IRCC recently announced that new changes to the Express Entry CRS system will allocate more language points to French candidates. French-speaking candidates will now receive 25 additional points for their language skills, up from 15. See Canada Express Entry System to give extra points to French-speaking candidates.