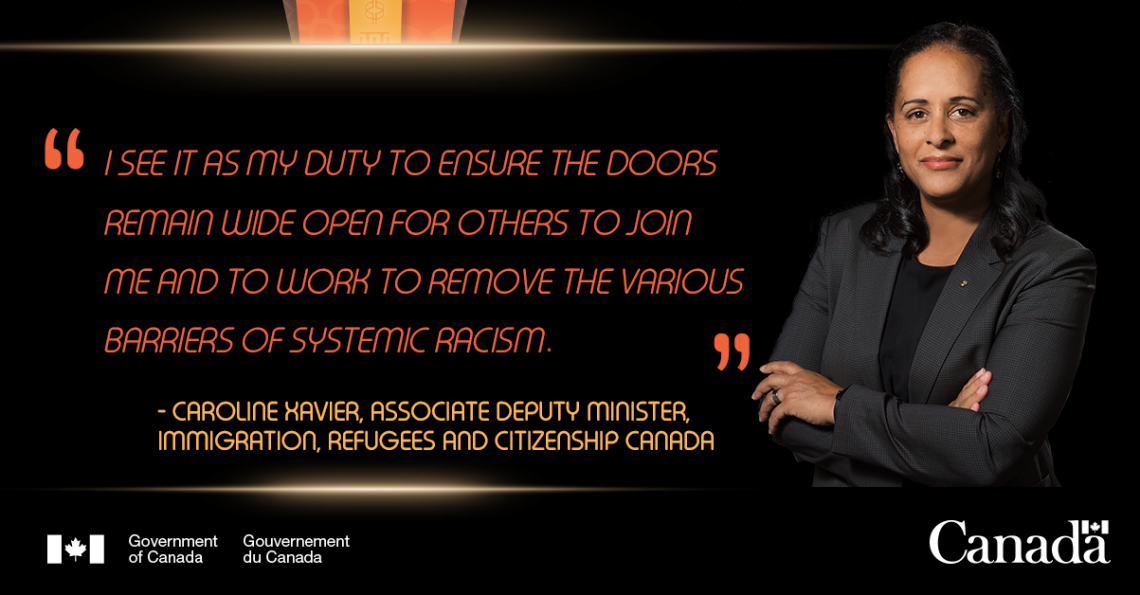 As part of Black History Month, Caroline Xavier, Associate Deputy Minister at Immigration, Refugees and Citizenship Canada (IRCC) shared a bit about her experience as the first African Canadian at the Deputy Minister level in the federal public service.

Table of Contents show
1 Black History Month – The Future is Now
2 Equity, Diversity and Inclusion
3 The time for change is now

Caroline has been with the public service for over 30 years and is a graduate of the University of Ottawa where she earned a Bachelor’s Degree in Administration, with a concentration in marketing and informatics. Caroline also holds an Executive Master’s degree in Electronic Commerce from Dalhousie University, Nova Scotia.

“Across government, we are marking Black History Month with the theme “The Future is Now.” For me, this is more than just a tagline. When I began my journey in government over 30 years ago, I didn’t see many Black people or many women in my workplace. People would see me and say, “….and you’re here for what?” “Are you the new COOP student?”

Prior to her appointment, Ms. Xavier joined the Privy Council Office in June 2017, as the Assistant Secretary to the Cabinet, Security and Intelligence. In this capacity, she was responsible for advising and supporting the National Security and Intelligence Advisor on security, intelligence and emergency management issues. Ms. Xavier was the Co-Chair to the Cabinet Committee on Global Affairs and Public Security, and also served as secretary to Cabinet Committee on Incident Response Group.

Caroline Xavier speaks passionately and from personal experiences about equity, diversity and inclusion in the workplace – both private and public.

“As I progressed in my career, I did start to see more women and racialized people, but still not many Black people, said Ms. Xavier. She added “To be honest, I just got used to it in my workplace and felt ok about it as I was surrounded and supported by an external community”.

But after having her children and as she began to rise into leadership positions, Ms. Xavier said she began to reflect on the fact that “I didn’t see people like me in the workplace, and I want a better experience for my children”. As I became a leader, I began to question who I was seeing – or not seeing at the table, especially the management tables”.

I had a sort of “a-ha” moment, and started asking about diversity and inclusion and participating in departmental visible minority committees wherever they existed. Now, I’m the first Black person at the Deputy Minister level in the federal public service, and I see it as my duty to ensure the doors remain wide open for others to join me and to work to remove the various barriers of systemic racism.

A reflective Caroline Xavier underscored that she is not so much angry about it as she is sad and, at times, frustrated, “especially when I hear peoples’ lived experiences and wonder how anyone could still see exclusion as okay and more importantly not recognizing the value of inclusion and representation”.

The time for change is now

Caroline Xavier has a varied background and wealth of experience, including in information management, information technology, enforcement, security and intelligence, project management and policy development.

She is well positioned to lead the charge for change in Canada.

“I get emails or comments regularly from people who say to me that I’m an inspiration, and that’s such an honour and a privilege. So I know I cannot fail – we cannot fail. Too many people are counting on us and the “Time is Now”.

She will not fail!

Will Canada fall short of its 2021 immigration target?

African Canadian Dr. Eugenia Duodu is Using STEM as a Vehicle for Change for Youth