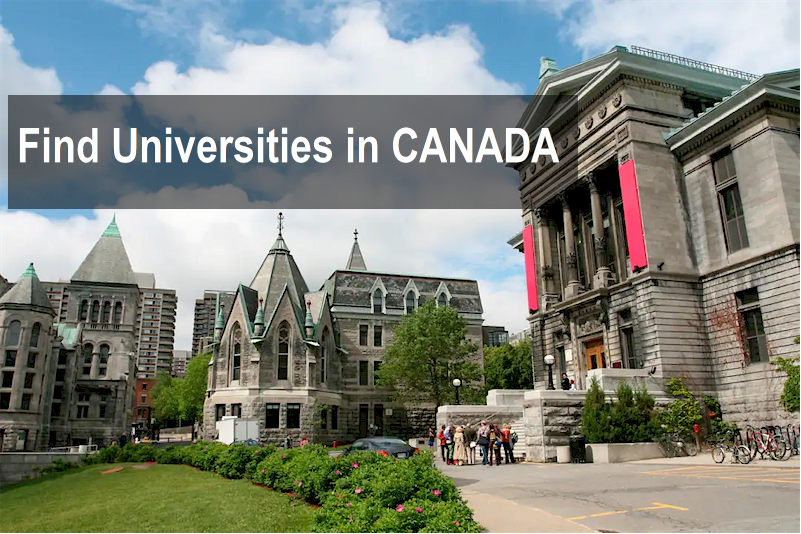 Only foreign students accepted into a Canadian DLI may apply for a Canadian Student Visa.

The last section provides a global ranking of top 26 universities in Canada as of 2021.

To help you to find Canada scholarships for your studies also visit Find Canada Scholarships.

Below is an online database of Canadian university study programs. It helps you determine where to study in Canada. It also helps you to find the programs that most interest you.

The Find Universities in Canada tool below is courtesy of SchoolSearch. Please also visit them.

Find Universities in Canada: Search for Language Schools in Canada.

There are 26 Canadian universities in the QS World University Rankings® 2021. QS ranks each based on six indicators. For example, employer and academic reputations and citations per faculty member, a measure of research impact.

Queen’s University, based in Kingston, Ontario, ranks in the top 10 universities in Canada. Although it dropped slightly globally to 246th place this year.

Queen’s University is certainly one of the oldest Canadian universities. Its founding in 1841 even predated the founding of Canada itself (by 26 years).

The University of Calgary ranks 246th in the world in 2021. It is made up of five campuses, and also has a branch campus in Doha, Qatar.

The Qatar branch of the University was opened in 2007 and focuses on nursing education.

Western University is located in London, Ontario Canada. It ranks 203rd in the world in 2021. Its international faculty membership also ranks 62nd in the world.

The University of Waterloo ranks 166th in the world in 2021. It also occupies a spot in the top 100 globally for the citations per faculty member indicator.

The University of Waterloo was established in 1956. This makes it one of the younger top Canadian universities.

The Université de Montréal ranks 118 globally in 2021. It is also is among the top 10 universities in Canada. Moreover, it is the top-ranked Francophone institution in the country.

The Université de Montréal, established in 1878.

The University of Alberta is ranked 119th in the world in 2021 although it is mainly based in Edmonton.

The University of Alberta is a huge economic driver for the province of Alberta. Consequently, it contributes five percent of Alberta’s annual gross domestic product (GDP).

The University of British Columbia ranks within the global top 50 at 45th. Also impressively, the university has graduated eight Nobel Prize winners and 71 Rhodes scholars.

Impressively, its international students population comes from some 150 countries.

The University of Toronto consistently holds on its first-place among the top universities in Canada. It has also climbed to rank 25th in the world this year.

The University of Toronto gets its best score for its academic reputation (18th in the world). It is also in the top 50 globally for its reputation among graduate employers.

The other 16 top universities in Canada are:

Find out more about studying in Canada with this complete guide, including advice on applications, visas, fees and more.

For information about ranking categories, and answers to other frequently asked questions, click here.

See how Canadian universities compare in the full ranking.

Guidelines to Obtaining Student Visa
Why study in Canada?