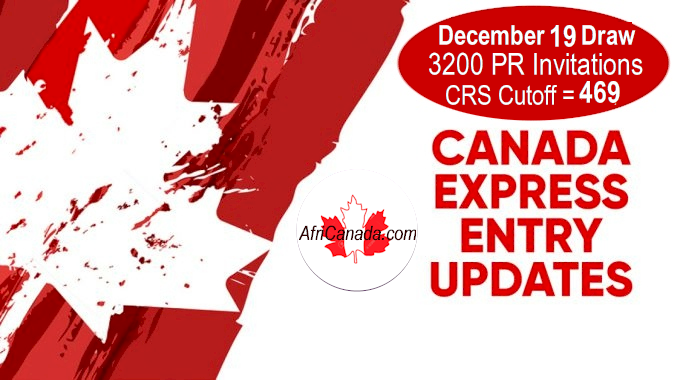 The 3,200 ITAs were issued to candidates with Comprehensive Ranking System (CRS) scores of 469 or higher, a 3-point increase from the previous December 11 draw, which had a cut-off score of 472.

A certain number of the highest-ranked candidates who have submitted their profiles into the pool are issued ITAs for Canadian permanent residence through regular draws which typically take place every two weeks. A candidate’s CRS score is based on factors such as age, education, skilled work experience and proficiency in English or French.

Find out if you are eligible to enter the Express Entry pool.

Candidates with scores below the latest 469 cut-off can improve their CRS scoring in a number of ways, particularly if they enroll in any of the provincial nomination programs that have Express Entry component. Express Entry candidates with a provincial nomination receive an additional 600 CRS points If their nomination is approved, the invited candidates will be issued an additional 600 Comprehensive Ranking System (CRS) points. The additional points place them in a favorable position to receive a federal Invitation to Apply (ITA) for Canadian permanent residence in a future IRCC) draws.

Fluctuation in the minimum CRS scores may be partly attributed to the time between draws, which has deviated on a number of occasions from IRCC’s usual pace of a draw every two weeks. For example, the December 19 draw took place only eight days after the previous draw on December 11 and saw the minimum CRS score decrease by three points, from 472 to 469.

Rank required to be invited to apply: 3,200th or above

If more than one candidate has the lowest score, the cut-off is based on the date and time they submitted their Express Entry profiles.

CRS score distribution of candidates in the Express Entry pool as of December 16, 2019