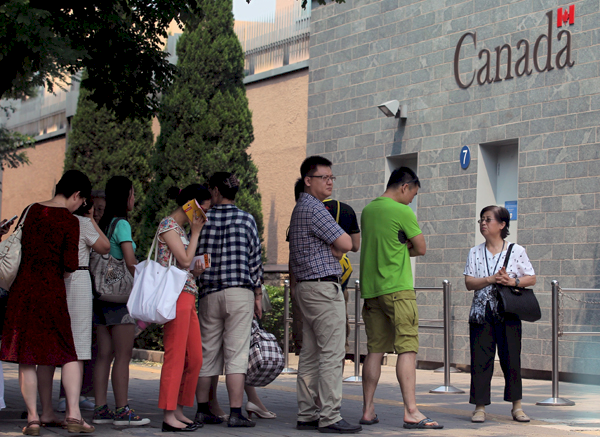 The Globe and Mail has reported that the Canadian government is facing calls to cancel an arrangement in Beijing where Chinese police own a company that collects details of people applying for visas to Canada. See Globe and Mail article. The Globe and Mail reported that Canada’s visa application centre in Beijing is operated by Beijing Shuangxiong Foreign Service Company, which is owned by the Beijing Municipal Public Security Bureau. It also alleged that at least some of the people working inside the centre are members of the Chinese Communist Party, recruited from a school that trains the next generation of party elite.

Beijing Shuangxiong operates the VAC as a subcontractor for VFS Global, a company headquartered in Zurich and Dubai that holds a wide-reaching contract to provide visa-processing services around the world for the Canadian government. VFS offices collect personal and biometric information that is then forwarded to Canadian immigration officials for decisions on who will be granted visas.

There are 11 Canada Visa Application Centres (VACs) in China. In addition to its questions over the Beijing VAC, the Globe and Mail says that the Shanghai Municipal Education Commission owns 30 per cent of the Canadian visa office in that city. China Travel Services, a large centrally owned company, owns the majority of the centre in Guangzhou. In Jinan, the 93.55-per-cent owner of the subcontracting company is Pei Zhongyi, a member of the Chinese People’s Political Consultative Conference, a key part of China’s ruling apparatus.

NDP immigration critic Jenny Kwan said that there is too much risk in the Beijing visa application centre setup, and would query Mr. Mendicino on the matter when he next appears before the House of Commons immigration committee. She called for the Beijing contract to be cancelled immediately. Conservative foreign affairs critic Michael Chong echoed similar sentiments ans asked that the government review and cancel any contracts with connections to China’s state security apparatus

The Globe and Mail article also quoted one Toronto immigration lawyer and one former director of the Canadian Security Intelligence Service (CSIS) who expressed dismay over the security risk posed to Canada by the ownership and operating structures of VFS Global’s Chinese subcontractor.