Over the past few years the Canadian government has developed a strategy to attract International students to study in Canada and to allow them to stay and build careers in Canada after completion of their studies.  Canada’s generous immigration policy for International students is enjoying surging success.   The policy put in place innovative study permit programs and an established post-graduation work permit program and a clear pathway to permanent residence.

Originally the program aimed at having 450,000 international students by 2022.  However, that target was achieved at the end of 2017, when there were 494,525 study permit holders across all levels of study. 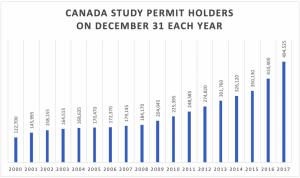 Candidates are being drawn here by the prospect of building a new life, instead of just getting a qualification.

Important reasons for the rise in Canada International students visa popularity include:

In 2015, five out of 10 international students said they wish to work in Canada after graduation. Now, seven in 10 say they have career ambitions. Meanwhile, six in 10 say they intend to become Canadian permanent residents.


The largest source countries include China, India, Mexico, and, post the US travel ban, Iran. For these countries, Canada scores high on three important parameters – quality, affordability, and post-graduation opportunities.  According to the latest UNESCO data, the total number of international students in the world has risen from 800,000 in 1978 to more than 4.5 million in 2013.

The international higher education system is in the midst of a period of instability due to political flux in traditionally popular destinations like the U.S. and the U.K.

Canada is well-placed to gain from these changes and is likely to become more popular among foreign students, something also likely to aid its effort to attract more skilled worker immigrants.

Canada has high academic standards. This will ensure that you will be earning a high-quality education experience.  It will provide introductions and open many doors to an excellent future and career advancement.  A Canadian degree, diploma or certificate is highly respected around the world and often recognized as equivalent to programs in the United States and countries in the Commonwealth.


The quality of an education experience and the standard of living in Canada are amongst the highest in the world. Yet best of all, tuition fees for international students are lower in Canada than in many other countries such as the United States, Australia and the United Kingdom. For these reasons, a study in Canada project is the preferred choice for students attending post secondary education at the college or university levels.

With so many of the world’s ethnic groups fully represented in Canada, everyone can feel right at home in Canada.  Canada’s rich cultural heritage provides the widest choices of ethnic foods and recreational activities.

Canada continues to rank among the highest in related United Nations surveys.  And Canada has 3 cities (Vancouver, Calgary and Toronto) among the world’s most liveable according to the Economist’s Annual surveys.  As a Canadian temporary resident and while you study in Canada, you can enjoy many of the same rights, freedoms and privileges that protect all Canadians.  This is the hallmark of what makes Canada such a stable and peaceful society.

Canada is a bilingual country with English and French as the Official Languages.  And it is a global leader in language education and training.  Here you will find many world class language education options that will help improve your proficiency and ability in either of our official languages.   For many, language courses are also important to support an eventual immigration project (Canada permanent residence) which requires high proficiency in English or French.

Campus Lifestyle is an important consideration for many international students and Canada does not disappoint. Campuses across the country feature the latest in technology with wireless hotspots throughout enabling a rich experience featuring online interactive learning experience.  Campus facilities often include Olympic-calibre sports facilities, concert halls, student-managed government, radio, newspapers and on campus businesses within an expansive infrastructure.  Canadian universities and colleges typically feature the best mix of an academic and leisure lifestyle in an environment that facilitates immeasurable opportunities to meet students from a varied international student microcosm.

Canada’s many universities and colleges are leaders in research one of the hallmarks of a Canadian post-secondary education experience.  With a study in Canada experience you can become a part of this important part of the Canada study landscape. In Canada, government and industry often collaborate together to support a myriad of research projects in the medical sciences, computer technology, telecommunications, agricultural sciences and environmental sciences.

Current government policy caters to a growing pool of international students with strong ties to Canada, including Canadian study credentials and Canada based work experience. Qualified students on a study permit are encouraged to apply for Canadian permanent residence under various Federal or Provincial immigration programs without ever having to leave Canada.

USEFUL SOURCES
How to Get Canada International Students Visa