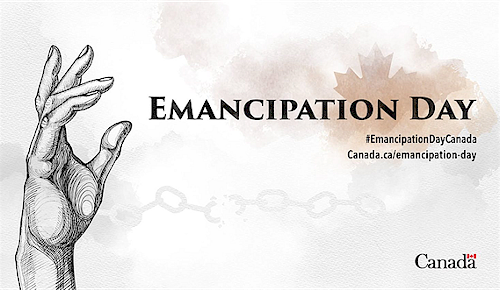 In the seminal celebration of #EmancipationDayCanada, Canada emphasizes the ongoing impacts of slavery and the injustice Black communities still endure.

On March 24, 2021, the House of Commons voted unanimously to officially designate August 1 Emancipation Day. It marks the actual day in 1834 that the Slavery Abolition Act of 1833 came into effect across the British Empire.

Today, we recognize and honour people of African descent for their courage and their determination in the face of the transatlantic slave trade’s devastating effects on their individual freedoms, families, and cultures.

Emancipation Day commemorates the Abolition of Slavery Act, which became law on August 1, 1834. This act freed more than 800,000 people of African descent throughout the British Empire. Since then, Emancipation Day has been celebrated on or near August 1 each year.

Emancipation Day is an important expression of identity for the Black community. And a reminder of the continuing struggle faced by people of African descent towards a more inclusive, diverse society.

Emancipation Day celebrations are especially popular in places where American slaves settled in Canada. Most notably, Windsor (then Sandwich town), Toronto, Hamilton and Owen Sound. And, of course, the Dawn Settlement in Dresden as well.

Black immigration via the Underground Railroad

The Underground Railroad was a network of people offering shelter and aid to escaped slaves from the South.

The reason many escapees headed for Canada was the American Fugitive Slave Acts. The Act allowed local governments to apprehend escaped slaves within the borders of “free states”. They then extradited them back to their point of origin. The Act gave permission to punish anyone helping the salves.

Harriet Beecher Stowe based her historic novel, Uncle Tom’s Cabin, on the life of Josiah Henson, a former slave. Henson escaped to Canada via the Underground Railroad. Henson settled in southwestern Ontario. He worked to improve life for the Black community and helped to establish the Dawn Settlement.

Canadians are not always aware that Black and Indigenous Peoples were once enslaved on the land that is now Canada. Those who fought enslavement were pivotal in shaping our society to be as diverse as it is today.

Therefore, each August 1, Canadians are invited to reflect, educate and engage in the ongoing fight against anti-Black racism and discrimination.

Emancipation Day celebrates the strength and perseverance of Black communities in Canada.