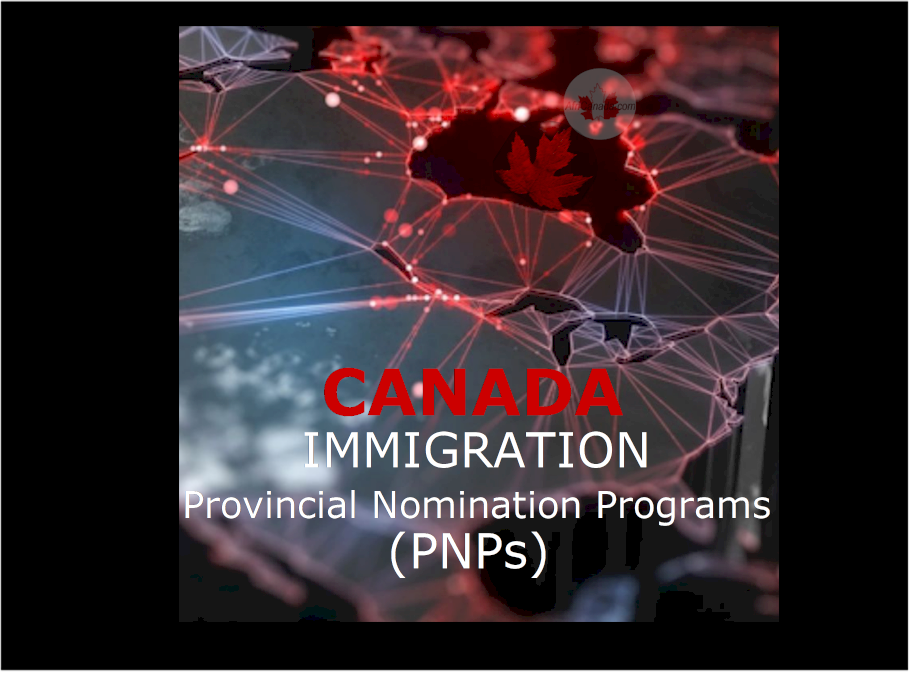 Under the Canada Provincial Nominee Programs (PNPs), provinces nominate individuals to reside in the province as PR and in order to meet their economic needs.

Importantly, Canadian provinces do not have the ability to give out permanent residency status.  However, as a result of a nomination you get a whopping 600-point boost to your CRS score. See Tips to boost your CRS Score.

Applying for a provincial nomination is not the same as applying for Canadian permanent residence.

​Most importantly, to be searched for nomination candidates need create an Express Entry profile.

After that, you have to make a separate application to a PNP program.

You can receive a permanent residence invitation by applying through Express Entry directly and skipping the PNP process.

However, the additional 600 points from a nomination effectively guarantees that you will be invited to apply for PR by IRCC.

​Each province/territory in Canada is looking for candidates with skilled job experience to fill labour shortages in their province. Important to note that the list of occupations vary from province to province, depending on their needs.

Landscape and horticulture technicians and specialists
Managers in agriculture

College and other vocational instructor

First and foremost, nominees must have skills and abilities to fill job shortages in Alberta.

Candidates must also be able to provide for their families over the long term.

Nominees and their spouse/common-law partner and dependent children apply through IRCC who makes final decisions on all permanent resident applications.

The BCPNP is a way for high-demand foreign workers and experienced entrepreneurs to gain permanent residency in B.C.

Similar to other PNPs, candidates with the skills and experience targeted by the province may receive a nomination

This will allow that foreign national to apply for Canadian permanent residence with processing times that are faster than other Canadian immigration classes.

In short, the BC PNP accepts applications under two main streams:

All the information, forms and guides you need can be found at:

The BC Provincial Nominee Program (BC PNP)

Manitoba has the oldest PNP in Canada, being first to establish one in 1998.

“to provide Manitoba with a mechanism to increase the economic benefit of immigration to Manitoba based on industrial and economic priorities and labour market conditions.”

The MPNP drives population growth in Manitoba, nominating skilled working-age people who are staying in the province.

Because of the MPNP, Manitoba’s population has had net positive growth since 2006.

According to the Manitoba Government:

For details of requirements and step-by-step processes visit:

The NBPNP selects, and nominates, qualified business people and skilled workers who will live in New Brunswick and contribute to the local economy.

The NBPNP accepts applications under these categories:

For full information on requirements and guidelines visit:

Immigration and Settlement in New Brunswick

The NLPNP accepts applications under these immigration categories:

In general, Newfoundland and Labrador nominate up to 1,050 individuals annually.

For details and requirements visit:

The NTNP accepts applications under two immigration programs, each with their own set of stream:

Furthermore, NTNP assists employers to recruit and retain foreign workers. In the same vein, it can help foreign workers and their families make the Northwest Territories their permanent home.

As with the other Canadian PNPs, the federal IRCC makes the final decision on all nominees.

The province of Nova Scotia is composed of the Nova Scotia peninsula, Cape Breton Island, and over 3,000 smaller islands.

Prospective immigrants who have the skills and experience targeted by Nova Scotia may be nominated to immigrate.

The application process depends on the stream you qualify for.  Review the different NSNP streams to determine if you qualify:

The processing time for eligible applications can be three (3) months or more.

Ontario is Canada’s most populous province, with over 40% of Canada’s population.

Furthermore, Ontario is the most popular landing destination for immigrants.

Each category is comprised of various streams under which applicants may submit an application.

For more information and guidelines on OINP visit:

You can apply for a PEI Express Entry nomination for permanent residency through the Prince Edward Island Provincial Nominee Program (PEI PNP).

To be eligible for nomination through PEI Express Entry

Very importantly, priority will be given to applicants that are living and working in PEI.

To create a profile you will be asked to provide a valid email address, and identification information including your passport details.  Applicants can only have one active profile at any one time.

For additional information and guidelines on PEI PNP visit:

The province of Quebec administers its own immigration programs.

Most importantly, its selection criteria are distinct from those of federal and other PNPs

The Quebec Ministry of Immigration (MIDI) selects candidates considered most likely to successfully settle in the French-speaking province.

Selected applicants will receive a Quebec Certificate of Selection (CSQ). This is an official document issued by Quebec immigration authorities.

Overall, purpose is to attest that the candidate has been selected by the province.

2. Important that CSQ holder file a PR application with IRCC within 24 months of issue.

Very importantly, the federal government’s role in evaluating a Quebec application is mainly limited on health and criminality.

What are the programs administered by Quebec?

Saskatchewan is one of the Canada’s most rapidly growing economies and populations. SINP attracts immigrants from around the world.

Each these categories may have one or more sub-categories.  For complete information visit:

The Government of Yukon uses YNP to bring foreign, skilled workers and business owners to Yukon. This allows the province to nominate qualified foreign nationals to the federal government for permanent residency.

These are the Yukon Nominee Programs: