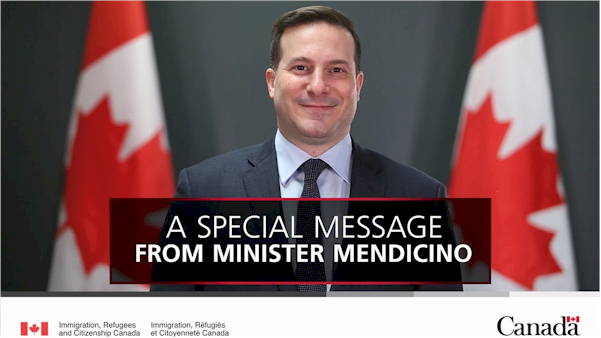 In a recent TVO interview, “Can Canadian Immigration Cope Amid COVID?”, of January 18, 2021, Canada’s Immigration Minister Marco Mendicino says Canada is moving towards putting its entire immigration process online in its bid to compete for immigrants from throughout the world.

“In a world that is increasingly going virtual, we are leading the way, especially when it comes to our immigration system,” Mendicino says to TVO. “We are the only ones that have moved our citizenship ceremony online, to my knowledge, and now we are also moving into the digital space when it comes to testing applicants.”

“My vision for our immigration system going forward is that it is completely virtual and touchless and that each and every one of these steps is integrated so that we become the envy of the world,” Mendicino says.

Mendicino is quite upbeat over the new immigration levels announced in the Fall of 2020 and believes that going absolutely virtual will aid its attainment. The federal government has outlined how it will make immigration the cornerstone of Canada’s plan to get the economy moving again and accelerate recovery from the devastating economic consequences of the coronavirus pandemic.

“I am confident that we can hit the levels that we have set … I’m confident because we are innovating at quantum speed … We have created new polices that will allow people into the country but in a manner that is safe.”

In the Fall Economic Statement released on November 30, 2020, the federal government noted that Canada’s immigration intake, the most important source of Canada’s population and labour force growth, has been severely disrupted by travel restrictions and application delays due to COVID-19. See Canada to spend Millions on immigration to spark economic recovery.

Mendicino also mentions some new immigration initiatives such as the Municipal Immigrant Nominee Program which will provide a platform for municipal governments to nominate candidates who wish to settle and support the labor force within their municipalities, similar to the Provincial Nomination Programs.

“We have been engaging with our provincial partners as well as local, municipal elected officials and business leaders when it comes to the Municipal Nominee Program. This is the latest iteration of a series of pilots which we have introduced, including, for example, the Rural and Northern Immigration pilot. even more so the Atlantic Immigration Pilot, which is basically a way to attract more newcomers to settle in Atlantic Canada where we are aging more rapidly than anywhere else. It has been an unqualified success in that part of the country because, again, not only that we have developed this policy but because local businesses and chambers of commerce have helped to sponsor newcomers who have the exact skill-set that is required to meet the demands of the communities in which they are arriving, and I think that the Municipal Nominee Program will be the next evolution of a series of pilots that are designed to, as you point out, help distribute population.”