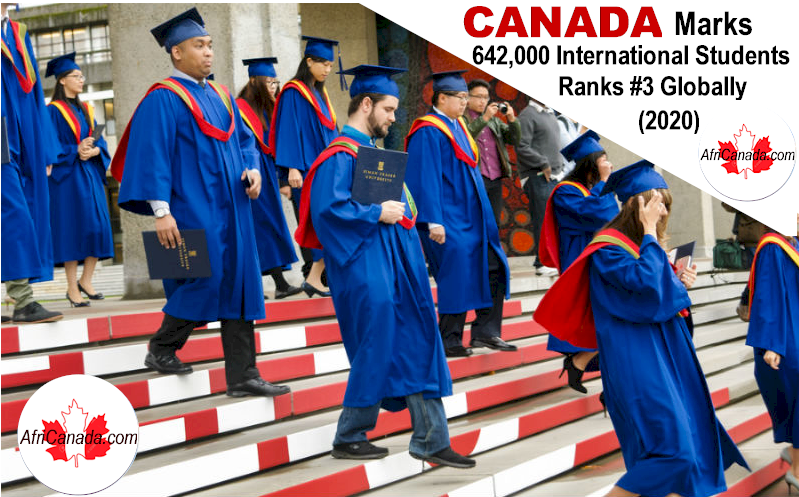 Over one-third (34%) of Canada’s international students come from India, with China second at 22%.

Why Canada is so attractive to foreign students

NARRATOR: You may have heard of Canadians’ friendly and open nature. In fact, the United Nations consistently ranks Canada as one of the best places in the world to live.

Text displays: “RANKS CANADA AS ONE OF THE BEST IN THE WORLD TO LIVE”.

NARRATOR: But did you know it’s also one of the best places to study?

A woman sits at a table and reads a textbook.

Text displays: “MATCH YOUR INTERESTS WITH SCHOOLS AND PROGRAMS IN CANADA THAT DELIVER EXCITING ACADEMIC, SOCIAL AND CULTURAL EXPERIENCES”.

NARRATOR: Match your interests with schools and programs in Canada that deliver exciting academic, social and cultural experiences.

A group of people work in a lab.

Text displays: “YOU CAN APPLY FOR A STUDY PERMIT – CANADIAN COLLEGE – UNIVERSITY – OTHER DESIGNATED LEARNING INSTITUTIONS”.

NARRATOR: You can apply for a study permit as soon as you’ve been accepted to a Canadian college, university or other designated learning institution.

Symbol for a university is shown followed by a tie and a briefcase.

NARRATOR: Check and see if the program you plan to take will make you eligible for a post-graduation work permit.

Two colleagues are shown collaborating in an office.

NARRATOR: You may also want to see what the Canadian workplace has to offer. Most international students are allowed to work on- and off-campus jobs, have internships and do co-op placements. You and your spouse or partner can gain valuable experience in the Canadian workforce.

Text displays: “YOU AND YOUR SPOUCE OR PARTNER CAN GAIN EXPERIENCE IN THE WORKFORCE”.

A group of people sit around a table and with a laptop. The laptop has an hourglass icon on it.

A man works at an office desk.

Text appears on his computer screen: “EXTEND YOUR STAY”.

NARRATOR: Should you need some extra time to complete your studies, decide to enrol in a second program, or just need a new visa to go home for a visit, the Government of Canada also has options to help you extend your stay.

Arrow graphic with a tie and briefcase within it and the text: “WORK” is shown.

NARRATOR: The post-graduation work permit is the top choice for international students who want to work after they study.

A group of colleagues collaborate in a workspace.

NARRATOR: With a post-graduation work permit, you’ll be able to work for up to 3 years in Canada for almost any employer.

A woman sits at a desk and has a cup of coffee.

Text displays: “ELIGIBLE FOR OTHER OPTIONS”.

NARRATOR: If you aren’t eligible for the post-graduation work permit, you may be eligible for other options that allow you and your spouse or partner to work in Canada on a temporary basis after you graduate.

A couple sits at a kitchen table.

NARRATOR: Be sure to check Canada.ca/international-students to find out when to apply for the post-graduation work permit.

Arrow graphic with a maple leaf within it and the text: “STAY” is shown.

A man uses his smartphone against a cityscape background.

NARRATOR: Wouldn’t it be nice to apply all of your Canadian educational credentials and work experience to pursuing a career and building a life in Canada?

A couple takes a selfie in a crowded space.

A woman is shown in a workplace.

NARRATOR: Express Entry, the Provincial Nominee Program or the Atlantic Immigration Pilot can be your path to permanent residency.

A woman rides a bicycle on an urban bike path. A red maple leaf appears.

NARRATOR: And the time you spend in Canada as a student or temporary worker counts towards eventually applying to become a Canadian citizen.

A group of people have coffee around a table.

NARRATOR: After all this, maybe you too can become Canadian, eh?

Canada wordmark is shown on a white background.