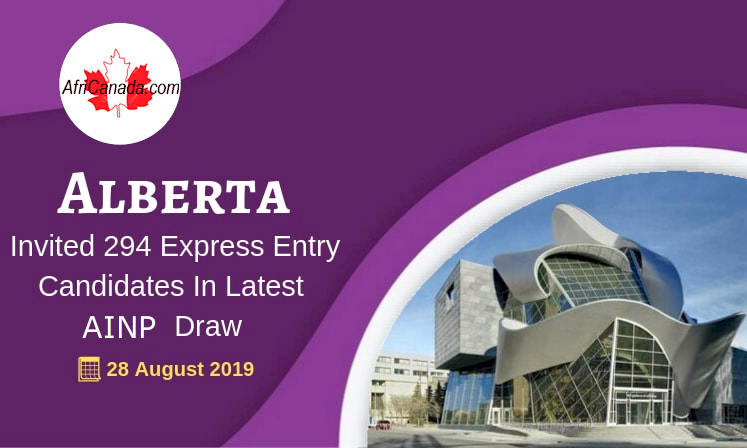 Some 294 Express Entry system candidates received invitations to apply for a provincial nomination in the latest Alberta Immigrant Nominee Program (AINP)‘s Express Entry selection drawn August 28. AINP targets issuing up to 6,000 nominations for the 2019 calendar year. This limit is set by the federal Immigration, Refugees and Citizenship Canada (IRCC). 4,115 nomination certificates have been issued so far in 2019. Approximately 1,640 applications await assessment for eligibility. The 294 invitations issued in the August 28 draw more than doubled the 121 issued in the previous draw on August 15.

The candidates selected in the AINP August 28 draw needed a minimum 400 points under Express Entry’s Comprehensive Ranking System (CRS) in order to receive an invitation. This minimum score was 38 points lower than the lowest score drawn through a federal Express Entry invitation round in 2019, which was 438 on January 30.


The minimum CRS score required has dropped to 300 on four occasions since the stream’s creation in June 2018. Four other draws had a minimum CRS requirement of 301 and four selected candidates with CRS scores of 302 and above.

Candidates are ranked in the pool based on their CRS score, which considers factors such as age, education, skilled work experience and proficiency in English or French. If their nomination is approved, these 294 candidates will be issued an additional 600 Comprehensive Ranking System (CRS) points. The additional points place them in a favorable position to receiving a federal Invitation to Apply (ITA) for Canadian permanent residence in a future Immigration, Refugee and Citizenship Canada (IRCC) draw.

Approximate volumes and assessment dates for each AINP stream/category are provided below.


“Assessing” means an AINP officer has been assigned a file to make an assessment and decision on eligibility.

Applications received after the date stated below have not yet been assigned to an officer for assessment.

The most common factors considered in AINP application processing include:

Read the AINP terms and conditions for more information on AINP application processing.

The AINP is no longer accepting applications under this stream.

The AINP is no longer accepting application under this stream.

The AINP works closely with Alberta Agriculture and Forestry (AAF) to assess the eligibility of applicants under this stream. Processing times are not available.

The AINP has a high volume of applications and Alberta Expression Entry submissions in the following occupations. These submissions may take longer to process.

The AINP regularly reviews available candidates in the federal Express Entry pool. Based on available profile information in the portal, the AINP draws to select candidates from the pool, inviting them to submit a completed application to the AINP. Information on Alberta Express Entry Stream Notification of Interest factors is included on the AINP – Selection Criteria page.

If you need more information, please use the contact form.