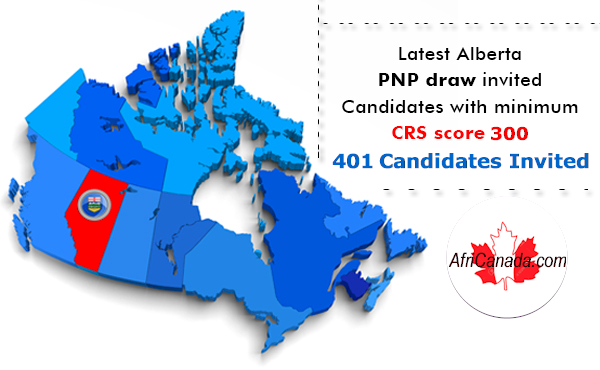 Alberta – AINP latest draws. Alberta Immigrant Nominee Program (AINP) invited 372 Express Entry candidates to apply for a provincial nomination in the latest AINP selection drawn October 24, 2019. Another 29 candidates were invited in a draw held October 10. Candidates invited in the October 24 draw had Comprehensive Ranking System (CRS) scores as low as 300 while the draw held October 30 invited candidates with a minimum CRS score of 350. Both scores are lower than AINP’s previous September 25 draw in which the minimum CRS score was 400 points. That draw was likely an aberration since it was higher than most previous AINP selection rounds, which have typically seen candidates with scores as low as 300 selected.

AINP targets issuing up to 6,000 nominations for the 2019 calendar year. This limit is set by the federal Immigration, Refugees and Citizenship Canada (IRCC). 5,171 nomination certificates have been issued so far in 2019. Approximately 1,950 applications await assessment for eligibility.

Candidates are not required to have a job offer in Alberta to participate in AINP, but having a job in Alberta may increase the likelihood of a candidate being invited. Candidates are ranked in the pool based on their CRS score, which considers factors such as age, education, skilled work experience and proficiency in English or French. If their nomination is approved, the invited candidates will be issued an additional 600 Comprehensive Ranking System (CRS) points. The additional points place them in a favorable position to receive a federal Invitation to Apply (ITA) for Canadian permanent residence in a future Immigration, Refugee and Citizenship Canada (IRCC) draw.