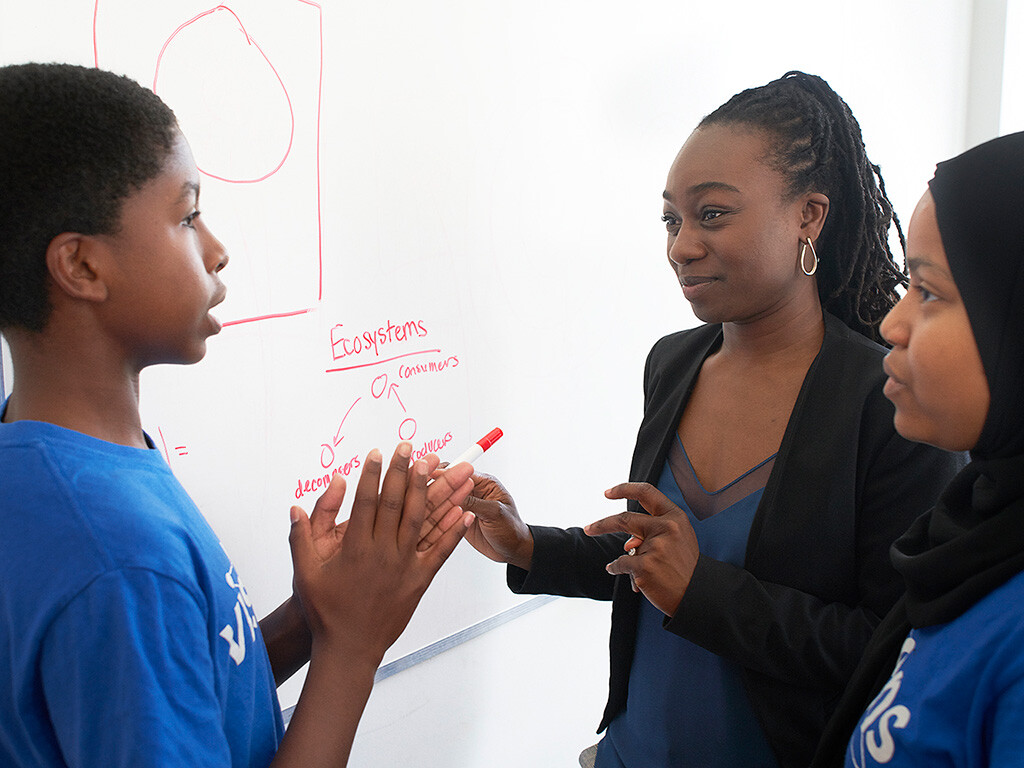 It is only befitting to close our 2021 Black History Month immigration coverage with how Dr. Eugenia Duodu, Toronto scientist, fought gender and racial stereotypes to pursue her chosen field, her leadership at Visions of Science and her successes in using STEM subjects (science, technology, engineering and mathematics) at schools as a vehicle for change.

Dr. Eugenia Duodu, 31, holds a PhD in chemistry from the University of Toronto. She is also the CEO of Visions of Science  a community-based network that supports children and youth in low-income neighbourhoods by encouraging them to study STEM subjects (science, technology, engineering and mathematics) at school.

Born in Canada to Ghanaian parents, Dr. Eugenia Duodu grew up in Toronto Community Housing in the west end of the city, a single child in a single-parent household. Her strong-willed, empathetic mother was her role model, advocate, defender and propulsion engine.

“She trained me,” Duodu says, recalling her mother’s strict discipline with math and English. “I never approached school thinking it was too hard for me.”

Despite her excellent grades in the sciences and passion for Chemistry, Duodu was told more than once, in elementary and in middle school, that she should opt for the applied (non-academic) stream – something her mother bluntly refused to allow. A guidance counsellor advised her that science might be too difficult – and suggested cosmetology as an option.

“It wasn’t always an easy journey in the school system,” says Dr. Eugenia Duodu. “I struggled with perceptions of myself, never sure I was good enough.”

Was it racism or sexism? “I think it was both. To be honest, I can never say for sure, but I do know the conversation made me feel like maybe I was wrong; maybe I couldn’t do it.”

According to a 2019 Statistics Canada report, more women are graduating with post-secondary STEM degrees than ever before; but only 20 per cent of female under-graduates opted for STEM studies, as compared to 40 per cent of males.

And while women account for 44 per cent of first-year STEM students, they are twice as likely as men to switch into other programs, usually in the first two years. Women account for just 22 per cent of the STEM workforce, and in the engineering and computers science fields, the numbers are substantially lower.

In 2010, Duodu completed an undergraduate degree at U of T, and moved on to her doctoral research, which focused on developing molecular diagnostic tools for diseases such as cancer and Alzheimer’s.

Dr. Eugenia Duodu is also quick to explain that there have been many people who have supported her along the way, and would not be in the position she is today without the support of those who have come alongside her in her life, “through encouragement, pointing me to opportunities, holding my hand… it has taken a village. I am grateful for my community of support.”

In fact, it was through the support of the previous Executive Director of Visions of Science that Dr. Duodu came to assume leadership of the organization. After meeting Francis Jeffers on the first day she volunteered, it became clear to Jeffers that she would succeed him. “He was transitioning, and the opportunity came for me to help run the organization at an advisory level. From there, by way of opportunities and openings, I was able to assume leadership. The whole process took about a year.”

Visions of Science exists to advance the educational achievements and personal development of youth from low income and racialized communities through meaningful engagement in Science, Technology, Engineering and Math (STEM).

Expanding the Reach of Visions of Science

When Dr. Eugenia Duodu joined Visions of Science in 2011 as a voluteer, the organization served youth in grades 3 – 8 across six communities in Toronto. Under her leadership, the age catchment has expanded through both STEM clubs (for grades 3 – 7) and the STEM Leaders Program for youth in grades 8 – 12. This program provides youth with advanced immersive and STEM-based experiential learning opportunities, as well as a forum for community-based leadership skill development. “We ultimately want to empower youth from our communities to become leaders for change,” Dr. Duodu explains.

Dr. Duodu is modest about the role she has played in transforming the organization. “I worked with an awesome team and built off of what was there before. We explored ideas and looked at the different possibilities,” she says, which includes securing charitable status in 2015. “That change allowed us to transform what we were able to do for fundraising,” she says, citing that the funding support has enabled the team to test and try new ideas and make the impact they wanted to make.

Under her guidance, Visions of Science has grown the team from five core staff members and 40 volunteers to 33 staff and 150+ volunteers. With such a steep growth trajectory, it’s often difficult for organizations to find the talent they need quickly – for Visions of Science, however, hiring hasn’t been an issue. “We have been able to attract like-minded individuals – people who want to make a difference in the community. They reflect the communities we work in and bring their own experiences to the organization,” she says. Dr. Duodu is particularly proud of the circle of giving back that Visions of Science has produced. “Many youth who were in programs work for us now.”

Based on How Dr. Eugenia Duodu is Using STEM as a Vehicle for Change for Youth and How Toronto scientist Eugenia Duodu fought gender and racial stereotypes to pursue her chosen field.